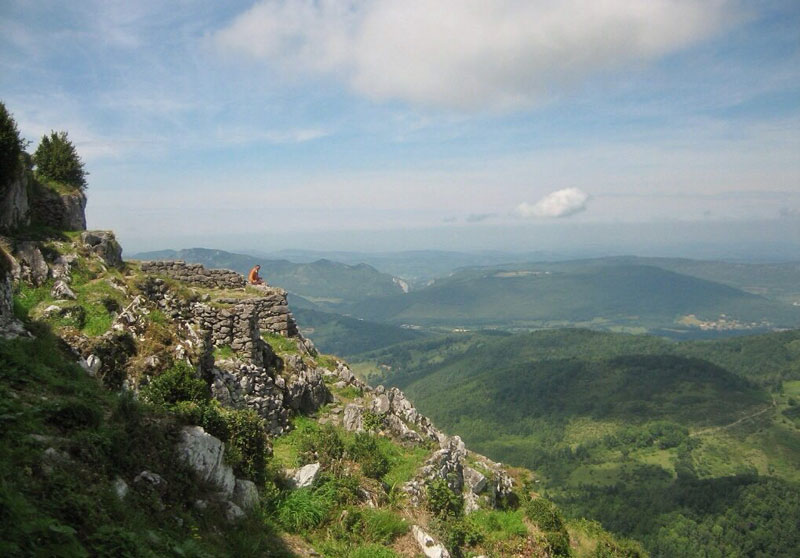 Catharism has been described as “the most successful heresy in history”. In Languedoc, “Pays Cathare” signs dot the countryside. One cannot drive far in any direction without coming upon the ruins of a Cathar fortress.

Who were the Cathars?

“Cathar” is allegedly derived from the Greek word, katharos, meaning “pure”. The Cathars were also known as Albigenians, because one of their original convocations was alleged to have taken place in the town of Albi, France. The origins go back to the Zoroastrians of Egypt, the Agnostics, the Manichees and the Bogomils of Asia and Eastern Europe. Catharism was a dualist religion. They believed that God created Heaven, the Kingdom of Light where no Evil exists. The material world, where Evil prospers, was created by Satan. Man’s purpose is to free his soul from this “prison of flesh” and re-unite it with the mind in the presence of God. This can only happen if the soul attains Knowledge, which was revealed to mankind by Christ, who was sent by God for that purpose. They believed that Christ was a prophet, not a Redeemer. This Knowledge is only attained through Baptism – not baptism by water, but baptism by “fire and spirit”. Failing this, when the body dies, the soul will pass to another body. This cycle will continue until Salvation is attained, and the soul is re-united with the mind in God’s presence in the Kingdom of Light. In other words, you stay in this cycle until you finally get it right.

The Cathars believed themselves to be “Good Christians”, or “Bon Hommes”. Their “priests”, both men and women, were called “Parfaits”, or “Perfects”, as in “perfect Christians”. Cathars did not believe in the church hierarchy of archbishops, cardinals and the Pope. They considered the Church decadent. You must remember that, during this period of history, the Catholic church was a bit scandalous: the clergy were living “large”; priests often mistook the word “celibate” for “celebrate”.

Cathars did not believe in the cross, statues or any other trappings of the Catholic faith.  The Parfaits did not ask the Believers for monetary offerings, which had to be a huge selling point.

The Parfaits did not eat meat, drink alcohol or practice sexual relations. They lived and worked together. As there were no physical churches, they served as wandering ministers, preaching their beliefs based on the gospels. Ordinary believers were not subject to these strictures. They needed to have faith and prepare themselves to attain knowledge/enlightenment, which would be given to them on their deathbed.

The simple, trappings-free religion appealed to many, and Catharism grew in popularity. Pope Innocent III enlisted a Cistercian monk, Abbot Arnaud-Amaury to raise a company of crusaders. Amaury engaged noblemen of Northern France who brought together an army. The pardon of sins committed and land for the taking were enticements enough.

The first battle of the Crusade against the Cathars occurred in Beziers, close to the Spanish border. Amaury arranged his men outside of the city walls to lay siege to the town. The men of Beziers were confident that their fortifications were secure. Amaury’s forces made quick work of them. They then turned and discovered the Bezierians’ big mistake: they had left the gates open. Amaury told his men to charge. One man asked: “How will we know which are Cathars?”  Amaury replied with his infamous quote: “Kill them all! God will recognize his own.”

The crusaders slaughtered around 7,000 citizens, including women and children – even those who had sought sanctuary in the Catholic church. This horrific incident represented not only the first of many to occur in the battle to stomp out Catharism, but it was the first crusade to occur on European soil. Most importantly, it was the first crusade that pitted Christians against Christians.

Arnaud-Amaury appointed a nobleman from Paris as his successor. Simon de Montfort was described as “a cruel warrior”, “murderous”, “bloody”.  Almost sixty years old, he was an experienced crusader, anxious to acquire rich southern territory. At Bram he inflicted exemplary punishment on those who dared to resist him. He ordered 100 prisoners mutilated – their eyes put out, their noses, lips and ears severed. De Montfort then set his sights on Minerve. Situated on a butte whose steep walls ascend 200 feet from the two rivers that formed it, Minerve was difficult to besiege. De Montfort constructed four catapults. The largest, which they named “Malvoisine” (“Bad Neighbor”) was perched on top of a cliff. From there they slung 220lb. boulders into the village, destroying the water supply. Eventually the lord of Minerve gave up in order to save the townspeople. Cathars were asked to recant their faith. 140 of them refused, and were burned to death.

The Pope ordered the Count of Toulouse, an important city in the 13th century, to deal with the Cathars. Dissatisfied with the result, he offered Toulouse to de Montfort who was killed by a boulder from his own catapult trying to take the city. The Count signed to the Treaty of Paris, relinquishing half of his territory to the King of France in order to save his people.

In Toulouse a monk named Dominic of Guzman, founded a monastic order, the Dominicans. This order was empowered by Rome to set up an Inquisition, empowered to interrogate suspected Cathars using a variety of techniques, including torture. They were responsible for the deaths – usually by burning – of thousands of “alleged” heretics. Many years later, the first Grand Inquisitor of Spain, Tomás de Torquemada, would be drawn from the Dominican order.

The End of the Cathars

Hounded, the Cathars headed to the rugged countryside to hide, including at the castle of Montsegur where 500 people took refuge. The crusaders besieged it for almost a year before the inhabitants gave up. Those who denounced Catharism were allowed to live but 225 people refused. Climbing ladders, threw themselves on to a burning pyre.

Persecution of the Cathars continued and in 1321, Guillaume Bélibaste, the last known Parfait, was captured and put to death at the stake in Villerouge Termenès.