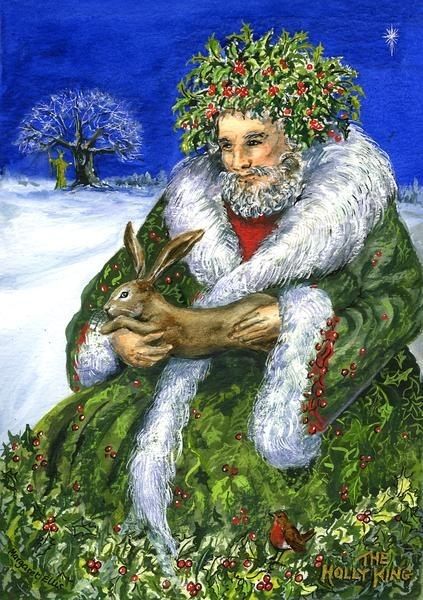 Yule, also known as Yuletide or Yulefest, is celebrated at the winter solstice, which falls between December 20-23 in the northern hemisphere, depending on the year. It represents the transition back into the light, and a welcoming of the sun. It’s also the official first day of winter.

Yule marks the longest night of the year and the welcoming of light returning to the world, as each day from this point on to the summer solstice will gain a few precious minutes of warm sunlight. It is the turning point from darkness to light. This ancient celebration was predominantly honoured in various European traditions.

People of ancient times would commemorate the solstice with candles and bonfires on the longest night as a tribute to the sun’s return. Dancing, singing, feasting, and rejoicing in festivities were an important part of the tradition, as was decorating the home and giving gifts. In addition to paying homage to the sun, Yule honors the natural cycle of rebirth, and most importantly, a celebration of hope. It embodies the idea of having faith that the dawn will come after even the longest, darkest night.

The Origin of Yule

Many ancient civilizations celebrated the winter solstice. For the Greeks, it was Kronia. The Romans had Saturnalia. Other cultures around the world had their own way of honoring the solstice, but Yule was the celebration of the ancient Scandinavian and Germanic people. The merrymaking of the Yuletide season usually lasted for twelve days, which was about the time it took for the Yule log to burn. The winter months in northern Europe were often a difficult time of famine, and so most of the cattle were slaughtered so they wouldn’t need to be fed. The temporary abundance of fresh meat meant it was a good time to feast.

However, the steady spread of Christianity throughout Europe quickly sought to abolish many of the “heathen” practices. Christian missionaries were abhorred by the pagans worshipping multiple deities and spirits as part of their seasonal celebrations, and they sought to convert the native people. One of their most successful methods was to learn the natives’ myths and religious beliefs so parallels could be drawn between Catholicism and pagan festivals. In the case of Yule, Christians adopted many of the Yuletide traditions (Christmas trees, wreaths, candles, mistletoe, et cetera) but redirected the purpose of the celebration to the birth of Jesus, even though many Biblical Scholars believe Jesus was actually born in July or August.

One of the most influential historical figures to accelerate the melding of Yule and Christmas was the Norwegian king Haakon the Good in the 10th century AD. He decreed that the Yule celebration would no longer be on Midwinter Eve, but rather the date we all know as Christmas on the 25th of December. Norwegian Vikings were required by law to celebrate either holiday with a supply of ale or face substantial fines. Over time, with the two holidays celebrated on the same day with many of the same traditions, Yule became synonymous with Christmas.

The Yule Tree originally represented the Tree of Life (or the World Tree) to early pagans. It was decorated with natural ornaments such as pine cones and fruit, and some culture later strung garlands of berries or popcorn so birds and wildlife could feast when visiting the tree.

Evergreens symbolize life and renewal. They were believed to hold a special power over death’s grip because they don’t lose their green or drop the leaves as the deciduous trees do every winter.

Holly symbolizes everlasting life and was believed to ward off evil spirits. The leaves represent hope, the berries fertility. It was often used to decorate the doors, windows, and fireplace.

Mistletoe represents vitality, romance, and fertility, but the Celtic Druids had valued mistletoe for its healing properties and can likely be credited as one of the first to use it as a decoration. The berries ripens in December, and the plant’s evergreen leaves made it an appealing symbol of wintertime. The origin of the “kissing under the mistletoe” is uncertain, but it’s believed that the ancient Greeks may have started the tradition as part of their winter holiday Kronia (Saturnalia for the Romans).

The Yule log was said to purify and protect the home from evil spirits. Traditionally, ash was the wood used. The log should either be received as a gift or harvested from the homeowner’s land—it must never have been purchased. The Yule log would be adorned with seasonal greenery such as holly or pine springs, then doused with cider or ale and dusted with flour before being set ablaze with a piece of last year’s Yule log, which had been saved to continue the tradition. Some pagans allowed the log to be burned for twelve days before ceremoniously extinguishing it. Others allowed it to burn until it naturally burned itself out; the longer the Yule log burned, the sooner the sun was said to come.

Candles symbolize the light and warmth of the sun.

Wreaths represent the Wheel of the Year and the natural cycle of life and rebirth, which is why they were traditionally made with evergreens. They were also gifted to loved ones as a symbol of friendship and good will.

Bells were rung during the winter solstice to herald in the light half of the year. For some, the bells were also said to drive away the demons that prowled during the dark time of the year.

Wassail is a spiced cider, oftentimes made with fruit. Sometimes ale and honey are added. When the Yule log was harvested, people would anoint the tree with wassail and toast to a good upcoming harvest.

Caroling was a popular Yule tradition in which the young children of a village would honor the winter solstice in song. They would go door to door singing, and the villagers would reward them with sweets and small gifts.

Below are a few traditional recipes to celebrate Yule.

1. Combine all ingredients in a large pan or slow cooker.

2. If heating on the stove, bring to a simmer, then reduce the heat and continue simmering for 45 minutes. If heating in a slow cooker, turn the heat up to high and let the ingredients simmer for 3-4 hours or until the fruit is soft. Yep, it’s that easy! Ladle into a mug and enjoy!

1. Bring the water to a boil, then pour half over the raisins and currants and let them soak. Let the remaining water cool to tepid.

2. Dissolve 1 tbsp of sugar in 2 tbsp warm milk for the glaze.

3. Sift the flour into a bowl with salt, cinnamon, and cloves. Stir in sugar. Make a well in the center and add tepid water with the water drained from the fruits. Crumble or sprinkle yeast over the water and leave 5 minutes or until dissolved. Add eggs and gradually mix in the flour by hand. The dough should become soft but not sticky; add extra flour if necessary to achieve the desired texture.

4. Transfer the dough to an electric mixer bowl and knead for 5-7 minutes until elastic. Place the dough in an oiled bowl, turning it so the top is oiled. Cover the bowl with plastic wrap and leave it in a warm place for 2-3 hours until it has doubled in bulk.

5. Butter the loaf pan. Return the dough to the mixer bowl and add the creamed butter, then beat for 1-2 minutes at medium speed until the butter is fully mixed and the dough is smooth. Reduce the speed of the mixer to low, then add in the soaked fruit and candied peel and mix.

6. Turn the dough onto a floured work surface. Pat it out with your fist to a rectangle about 9 inches wide. Roll the dough into a cylinder, pinch the edge to seal, and then drop carefully into loaf pan, seam side down. Cover loosely and leave to rise for approximately 1.5-2 hours until the pan is full. Heat the oven to 400°F.

7. Brush the loaf with glaze and bake for 20 minutes. Brush with glaze again, then lower the heat to 350° and continue baking 30-40 minutes until the loaf sounds hollow when unmolded and tapped on bottom. Transfer it to a cooling rack.

The Yule bread can be stored for up to a month if sealed in an air-tight container. The flavor will mature as it rests. The bread can also be frozen.

However you choose to celebrate Yule, there truly is no “right way” or “wrong way.” Choose the practices that best apply to you and make them your new tradition with your own personal spin.