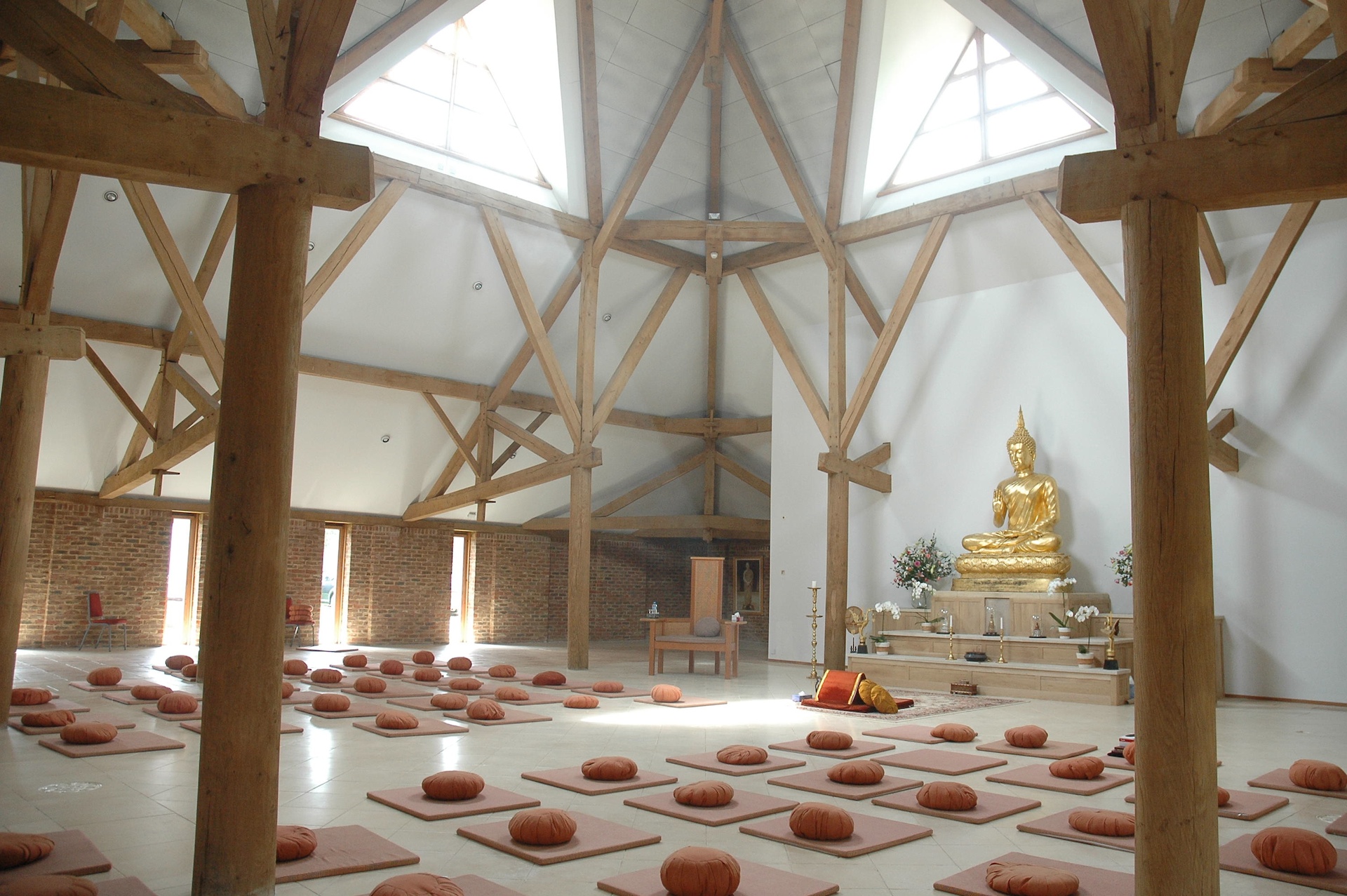 Listen to the recording or read the article below.

Over the years I have found this meditation one of the most powerful for my spiritual progress and understanding. It is the meditation that I keep coming back to. I use it regularly, combining it with the meditation on the breath.

So what is it? I came to it practising up at Amaravati monastery one weekend. Ajahn Sumedho, the abbot of the monastery back then was leading the meditation and introduced us all to the sound of silence. I heard it almost immediately and realised that I’d been hearing it all my life and hadn’t noticed. There it was. Hiding in plain sight. It was so surprising I nearly fell off my cushion.

The sound of silence is known in many cultures. A whole yogic system was developed around it called Nada Yoga. It is known in South America and here the Incas attached great significance to it, believing it originated from the gods. There are many theories about where it comes from. It could be the resonance of the human mind, the echo of the birth of the universe. Some have even said that it is the voices of long dead ancestors.

For me, having listened to it for many years, I think it could be the resonance of the brain as it seems to manifest inside the head. Alternatively the cosmic hum could also be true.

Actually, I don’t believe it matters what it is. In practising we should let go of all our preconceptions of what it might be. Notice perhaps if your natural inclination is to find some deep spiritual meaning in the sound. Let that go. That preconception will, itself, get in the way of the practise. The sound is just the sound. Accept it and go into it.

How can we have a sound of silence? It is very much akin to space. When we enter a room, we focus on the objects. We don’t necessarily notice the space between the objects. But the space is just as important. At Amaravati, Ajahn Sumedo asked us to just spend a moment, sitting on our cushion and cast our eyes around in that lovely shrine room. It is a beautiful space the shrine room at Amaravati. Very simply and unadorned. But somehow it is the big beautiful space that makes it so spiritual. It doesn’t need loads of wall hangings or vibrant colour. The space is special. And so it is with sound. Because sitting behind all sounds, we find the sound of silence. There is never complete silence, because it is always there.

It sounds like white noise. When you pick it up it has within it a whole range of frequencies. It is not a single frequency like a bell. It has thousands of frequencies within it. It varies and changes constantly both in pitch and volume. It is far from static. Step into a silent space and you will hear it. And of course, just like the breath, it is always with us. So like the breath, we can use it to anchor ourselves when life is kicking off. The more you practise with it, the more apparent it will be. When Ajahn Sumedo described it to us he said that he had been meditating by a waterfall once and heard it sitting under the sound of the thundering water. At the time, all those years ago, I found this a challenging concept. Some years later, I was riding my motorbike through the middle of Luton. I pulled up at some lights and heard it. Despite the grumble of the bikes engine and the traffic around me, I could hear it.

When we go in to the sound of silence it can teach us many things. Firstly, notice if you have a resistance to it. Maybe you are focussing on other sounds that are more usual. You hear them because, like the objects in the room, they demand your attention. But just as we can start to notice the space in the room, we can move our attention away from the more obvious sounds and listen to the constant sound behind them.

When the other sounds distract you, the sound of silence is particularly powerful at developing concentration. We have to relax into it. We don’t see space unless we look beyond the objects.

Interestingly, the more we drop in to the meditative state, the louder the sound. Again, coming back to the idea of space. When we first moved into the Shrine room at Amaravati, I didn’t see space. I saw cushions, monks, pillars and the shrine. It too Ajahn Sumedo’s direction to help me see the space and this was when I was settled, relaxed and easing into a meditative state.

It is the nature of this meditation that helps us move into the gentle state of Samadhi, that soft gentle single pointed concentration. The sound of silence is especially conducive to this. I have found that it is a very powerful way to move up through the levels of absorption in meditation.

Letting go of self. For those of you new to meditation this is probably the most difficult concept to get your mind around and to be honest it’s probably best to let this arise naturally. After all, we want to experience this, not think about it in an academic way. By letting go of self, we learn to connect more deeply with the world around us. As we connect more deeply, we let go of self more and more. A spiral affect. So the sound of silence is an incredible way to explore this. In order to hear it, we seem to have to really connect with space. With the world outside of us. But because we don’t “hear” it in the traditional sense, it is more our mind that is connecting with the space around us rather than our traditional senses. So you really get a feeling of softening the boundary between self and the world. The more that boundary softens, the more we hear the sound.